After 150 years in business, Park Union Lumber on South Salem Street was pulled from the brink of closing when it was bought July 10, 2014 by another Morris business—Eastern Contractor Services of Flanders.

“Because the place has so much history, we couldn’t bear to let a major player gobble it up and make into another yard,” said Michael Colaiacovo, coowner of Eastern. “Originally, the three things it sold were Coke fuel, coal, and some lumber and timber.”

Park Union, the oldest lumberyard in the state, opened its doors in 1864, when President Lincoln was in office. According to its most recent former owner, John De Grande, it did business at multiple locations on Blackwell Street. County records show it incorporated in 1895. The company endured tough times, including two fires, one in 1915 and another, at 118 East Blackwell St., in November 1954. According to an account in The Newark Evening News, the later blaze—the largest in the town’s history, according to De Grande—was fought by 300 firefighters and claimed a number of businesses, a home, and two apartments. It leveled Park Union, which is what caused the business to move to its current location, the site of what once was the Predmore farm.

“The wife of one of the Park Union owners was a Predmore,” recalled De Grande, who was born and raised in Dover and owned the business, which he renamed Park Union Building Supplies, for 30 years.

Yet nothing threatened Park Union, which now has a staff of 20, quite like the Great Recession, and the accompanying building slowdown, of the past five years. 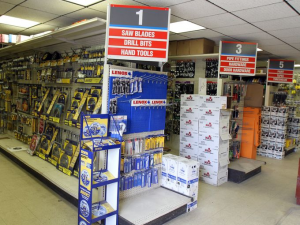 “We had the big turndown in 2008,” said Bob Morgenroth, longtime manager of the Park Union lumberyard and hardware store, who will retain his job. “It’s been a tough go. We’re starting to see some comeback now. We’re lucky these guys at Eastern bought us.”

Behind the scenes, there’s been good synergy between the two businesses since the 1980s. In those days, the building industry was hit by another recession and Larry Sawyer, founder of Eastern Insulation, was struggling through it. To help support her family, his wife, Natalie Sawyer, went to work for Park Union.

“Through some mutual friends, my mother was hired at Park Union in the 1980s as their bookkeeper and stayed for 15 years,” Sawyer said. “She trained the bookkeeper who is still here now and she worked with Bob, whom I’ve known since I was a child. His reputation throughout the industry is incredible.

“Michael and I are going to manage the business,” he added, “but we’re not going to sit at the front counter. So it was important for us to know we can trust the people who are here.”

Park Union thrived during much of the time De Grande owned it, an era that partially preceded the rise of the big box home improvement stores. (The Dover Home Depot is less than four miles from Park Union.) He enjoyed knowing the names of most people who walked through the door.

“There were some great years, no doubt about it,” Morgenroth said. “We’d did $10 million in gross receipts. Now, it’s $2 million to $3 million.”

Some of his fondest memories were providing SJC Builders, owned by Sal Campo, with lumber for its numerous developments in Randolph and Denville.

“Houses were staged and ready to go, maybe 10 at a clip. It was hard to get enough lumber in to supply him fast enough,” Morgenroth said. “It didn’t matter what the price was. We had to have it. Those were the days when it was really jumpin’.” 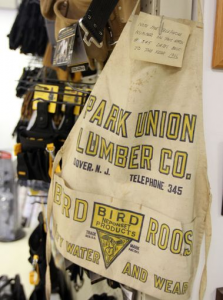 But he also remembered with satisfaction local charitable projects in which Park Union participated under De Grande’s leadership, including providing lumber at cost for at least 20 Morris Habitat for Humanity homes.

Some customers stayed with Park Union through thick and thin, even when inventory was low. Two are Leonard Freed and Gary Osborne, of Freeborne Decking, who’ve built decks throughout the region since 1979.

“Park Union works well with us. Everything clicks,” Freed said. “They’re convenient to our location. Bob is very good. He’s personalized. He’s right there for us. I don’t like the big box stores. At the smaller places, I know I’m getting exactly what I’m specifying.”

Eastern has taken on a substantial amount of debt to take over Park Union but has plans to breathe new life into it, according to Sawyer. Plans include expanding the little hardware store to a home center that sells, among other items, tools, grills, garage doors, and energy-efficient products. Also, Eastern will refer its client base, at first from Morris and surrounding counties, to Park Union for lumber. Eventually, it will refer its clients from Bergen to Cape May counties.

“These guys here at Park Union can deliver wood anyplace. All the wood for a new home gets delivered to the job site,” Todd Sawyer said. “Expanding will mean investing more money, buying more trucks, hiring more people, which is a great thing because we’re putting people to work and spurring the local economy.”

Park Union is the third company to join Eastern’s growing group of companies. Based in Flanders and a Morris County company since 1974, Eastern is now the largest independent insulation contractor in the state, according to Todd Sawyer. In 2007, it purchased Four Seasons Insulation in Tuckerton.

Currently, Eastern is looking to expand in Texas, Pennsylvania, and Missouri, he added.

At Park Union, the goal is to service everyone, including big developers, small ones, and individuals; expand what the store offers, and to continue to distinguish itself from what the big box stores do.

“We do some different things they don’t do,” Morgenroth said. “We do a lot of propane tanks for homeowners on the weekends. We started selling a couple different colors of mulch, sand, and gravel. During the winter, we sell rock salt to the contractors and to the homeowners.”

At the end of the day, Colaiacovo said, Park Union will be what it once was—a full-blown hardware lumberyard for local people employing local people. For that reason, Eastern is reverting to the business’s original name, Park Union Lumber.

The change is more than symbolic, as both Sawyer and Colaiacovo don’t want to give up on the spirit of small business and free enterprise that helped build the nation in the era that Park Union was begun.

Throughout the country, noted Sawyer, who also is a motivational speaker, some small businesspeople have given up and decided to sell out, get a job, or just retire.

“That’s something we don’t believe in,” he said, adding that he hopes people stop giving up. “Then maybe the United States can get back on its feet and get back to what it’s supposed to be, which is the land of opportunity.”